The oldest pizzeria in Toronto 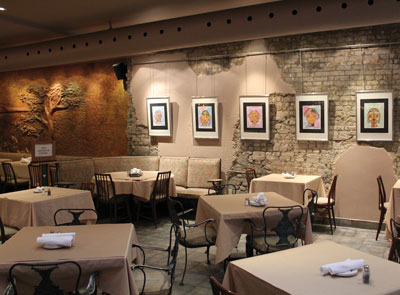 Itâs generally accepted that New York Style pizza in Toronto was born when the Pugliese family opened the doors of Vesuvio in 1957, making this restaurant the oldest pizza place in Canadaâs biggest city.

Using high-quality ingredients and maintaining customer relationships that span generations are just a few of the reasons that Vesuvio Pizzeria & Spaghetti House has been a customer favourite for 53 years.

Located at 3010 Dundas St. W. in the Junction neighbourhood, Vesuvio opened its doors the same year that Elvis was rocking the stage at Maple Leaf Gardens. The Pugliese brothers immigrated to Toronto from Italy. Domenico Pugliese, the eldest of four brothers, went to New York to learn everything he could about making pizza, bringing back with him a pizza dough recipe that has remained unchanged for decades. As Joe âChicagoâ Rodrigues, a pizza maker and chef with Vesuvio since 1981, puts it: âAfter 53 years, you become perfect at something because you do it so often. The owners are hands on all the time, so they keep the recipe exactly as it should be.â

Today the west-end landmark is owned by Ettore Pugliese, one of the original brothers, and Rita Pugliese, wife of the late Corrado Pugliese, who, sadly, passed away last year. Through lifeâs changes, Vesuvio has remained a tight-knit, family operation, with Ettoreâs daughter Paolo acting as restaurant manager. Of the more than 40 people on staff, many have been part of the business since they were teenagers.

âMost employees have been here for 10-plus years. They started out as teenagers, have gotten married, had kids and theyâre still here,â Rita says fondly.

With a roomy sit-down restaurant and a separate side for takeout, pizza lovers can enjoy mouth-watering slices and homemade pastas. A typical Friday night sees more than 500 pizzas fly out the door, with 13 drivers criss-crossing the Toronto West streets, bound by Lake Ontario to the south, Lawrence Avenue to the north, Kipling Avenue to the west and Christie Street to the east. If an order is large enough, the accommodating owners say they will deliver anywhere, but Rita warns that on a busy night, the wait could be as long as one to one and a half hours for delivery. For Vesuvioâs loyal customers, itâs worth the wait to sink their teeth into that light, chewy crust sporting the freshest toppings available.

If customers choose to dine in, the restaurant side is an inviting, large room with an original mural dating back to the 1960s and beautiful art adorning the walls. Three vibrantly coloured paintings â created by Arts for Children and Youth, an after-school program for children living in high-risk communities â fill the west wall of the room. The east wall boasts local artwork provided by the Junction Business Improvement Association, with new pieces gracing the space monthly. The tables are topped with craft paper, and crayons are doled out to children to occupy their imaginations while they dine, making this spot perfect for a fun night out with the whole family. Rita says some of their clientele have been chowing down on made-to-order pizza and pasta since the beginning. âWe have people who were coming here when they were going to school. Theyâve since gotten married, had kids, now their kids have their own kids, and they still come.â

Customer loyalty can be difficult to cultivate. Rita attributes Vesuvioâs long-standing success in the community to a high-quality product. They visit the Ontario Food Terminal market twice a week, selecting the freshest ingredients to adorn Vesuvioâs traditional handmade dough and tomato sauce. Even with the rising prices of cheese, this pizzeria is shelling out for high-quality mozzarella, maintaining a quality pizza that west-enders have come to expect over the past half century.

While the success of a pizzeria hinges on a good product, every business also needs to bend and move with the times, making decisions that may be difficult but necessary to ensure longevity in the industry. The Pugliese brothers recognized this during the 1980s and made a difficult decision to close the restaurant side and focus on their take-out and delivery business, due to a longstanding ban on alcohol in the Junction. The Dundas Street West area had been proclaimed âdryâ in 1904 and the alcohol ban continued until 2000, making it difficult for all restaurateurs in the area to compete with other Toronto eateries. Being prevented from serving a glass of wine or cold draught beer with a steaming pizza made it very difficult to grow the dine-in side of the business, and so the restaurant was closed and used for storage for almost 16 years. In 2000, a vote to lift the alcohol ban finally went through, and the restaurant was reopened the same year. The Pugliese brothers were able to make a tough decision back in the â80s that allowed them to keep their business profitable and maintain their presence within the pizza industry. With both sides of the business operating again at full tilt, the original Pugliese vision for Vesuvio is right on track.

The Pugliese family enterprise that opened its doors when such classic cars as the Ford Mercurys were still rolling through the streets of Toronto, is a long success story summed up by Rita.

âIâm happy, Iâm proud that my husband and his family started this business. They worked extremely hard to start it and to keep it going. To see people coming over and over again, it gives you a sense of pride, itâs nice. I mean how can you describe it. Itâs pride in what we do and how we treat our customers.â

View All
Regarding up to date changes due to the Covid-19 situation please refer to our Facebook page.